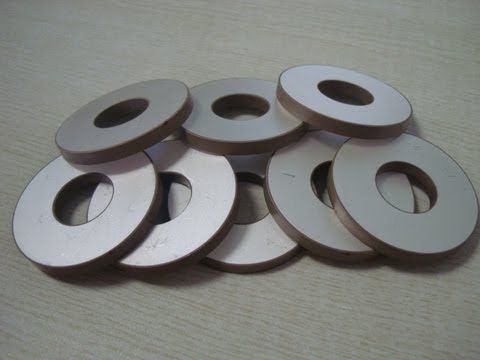 Piezoelectric ceramics are materials that generate an electric potential in response to applied mechanical stress. This makes them very useful for various applications, such as sensors and actuators.

One of the most common piezoelectrics is PZT, which is made from lead zirconate titanate. This material has a very high piezoelectric response, which can generate a large electric potential in response to applied stress.

PZT is used in various applications, including ultrasound imaging, vibration damping, and microelectromechanical systems (MEMS). They are also an essential part of many modern technologies, and their use will only likely increase in the future.

Piezoelectric ceramics are made from various materials, including lead zirconate (PZT), barium titanate, and lithium niobate. These materials are combined with a binding agent to form a ceramic powder. The powder is then pressed into a mold and heated to high temperatures to form the finished product.

Piezoelectric ceramics have many applications, including sonar, medical imaging, and vibration control. They are also used in microphones, loudspeakers, and piezoelectric motors.

One of the most critical properties of piezoelectric ceramics is their elasticity. This means that when a force is applied to the material, it will change shape. However, when the force is removed, the material will return to its original shape.

This property allows piezoelectric ceramics to be used in various applications, such as sensors and actuators. Applying a voltage to the material can make it change shape. You can then use this to create movement or measure pressure, strain, or acceleration changes.

Another important property of piezoelectric ceramics is their dielectricity. This means that they can store electrical charges on their surface. When a voltage is applied to the material, it will create an electric field.

This property allows piezoelectric ceramics to be used in applications such as capacitors and energy storage devices. Applying a voltage to the material can make it store electrical charge. This can then power electronic devices or discharge electricity when needed.

By applying a force to the material, it can be made to generate an electric charge. This can then power electronic devices or discharge electricity when needed.

Piezoelectric ceramics are often used in electronic devices because they can convert electrical energy into mechanical energy and vice versa. For example, when a voltage is applied to a PZT element, it will change shape. This deformation can be used to create sound waves or generate electricity. Conversely, when PZT is subjected to mechanical stress, it produces an electrical voltage.

ALSO READ: Is Mop and Glo Good for Ceramic Tile?

What Is the Most Powerful Piezoelectric Material?

The most powerful piezoelectric material is lead zirconate titanate (PZT). This ceramic has a perovskite crystal structure and can be made into thin films. PZT is used in microphones, speakers, and ultrasonic transducers. It is also used in medical imaging and actuators for moving objects.

PZT has a high piezoelectric response and a large electromechanical coupling constant. This makes it useful for applications that require large amounts of force or displacement. PZT can generate electric fields of up to 100 kV/cm. It can also produce displacements of up to 0.01 mm.

Why Are Piezoelectric Materials Important?

Piezoelectric materials are essential because they can convert mechanical energy into electrical energy and vice versa. This property is known as the piezoelectric effect, and it was first discovered in 1880 by French physicists Pierre Curie and Jacques Curie.

Piezoelectric materials are also increasingly used in sensors, actuators, and motors. For example, piezoelectric sensors can measure pressure, force, strain, and acceleration. Piezoelectric actuators can generate vibrations or create linear or rotary motion. And piezoelectric motors can convert electrical energy into mechanical energy (such as torque).

Piezoelectric materials hold great promise for a wide range of applications. As research continues to improve these materials, we will likely see an increase in their use in everything from energy harvesting devices to sensors and actuators.